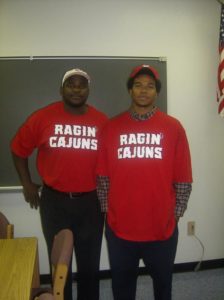 “A mentor is someone who sees more talent and ability within you, than you see in yourself, and helps bring it out of you.” –Bob Proctor

When I seventeen years I had one goal and one goal only. Play college football. This was not just a goal, it was an obsession. I still have the box of media guides that I collected from different colleges programs. The University of Miami filled those boxes, and as I scrolled through the pages, I would visualize seeing my picture among the many players. Going into my senior year of high school I was confident that I would have an opportunity to complete my goal. There was only one problem. I had never had a winning season while attending Suncoast High School, and had a different head coach each year. Many people laughed at the thought that I would receive a scholarship to play college football. I was told be “realistic”, but there was one person that believed as much as I did. Maybe a little bit more.

Going into my senior year we had gotten a new coach. Coach Williams arrived to take over a team that had won  1 game the year before. He was in his 20’s, a Suncoast Alumni, and had received a scholarship to play college football himself. He was also stern and did everything in his power to break the ugly habits that developed around the program. The first time I met with coach he asked me did I believe I could play college football. Of course I answered yes, but for the first time there was a little uncertainty. He promised me that if I did my part in the classroom and on the field that there would be a school to give me that opportunity. Coach Williams pushed us to levels we didn’t think were possible. Implementing his style of conditioning and workouts that he had experienced while in college. We were not a very talented team man for man, but there was no team more mentally prepared. This however did not lead to the success on the field we expected, we finished the season with only 2 wins.

As recruiters would come to the school after the season, no one showed interest in offering me a scholarship. My confidence began to waiver, but my coach had a plan. The Outback Bowl All-star game was a game filled with the most talented players in the county. Coach Williams years later told me how he showed up to the coaches meeting, uninvited, and made a pitch for one player. The only player who was apart of a 2 win team was the last selection into the game. This game led to me being spotted by a coach from The University of Louisiana- Lafayette, the Ragin Cajuns. I received my first and only offer, and fulfilled my goal of attending college on a football scholarship. I love sharing this story because it is a reminder to how important it is to have mentor. Having someone who can see your potential while they lend a hand to help mold it. Becoming a mentor was direct effect of having a great mentor, one who altered the fabric of my life. Many of us are given the opportunity to make an impact on the lives of others. We never know what type of chain reaction we may spark from our generosity.

One thought on ““My Mentor Story””