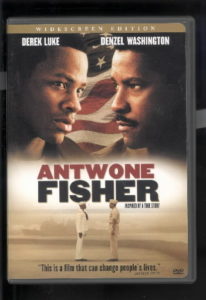 I remember being 12 years old when my mother rented a movie from this prehistoric place called Blockbusters. I would often watch movies with my mother, because as she tells it I can remember every detail to tell her in case she had to go to the bathroom. The movie we watched that night changed my life. The movie we watched that night was Antwone Fisher.

If you have never seen this film, I am recommending it to you today. The movie however is based on a book, titled Finding Fish which later inspired the movie which was directed and featured Denzel Washington. At 12 years old, this movie impacted my life in a way that couldn’t explain at the age of 12, I just knew it sparked something in me. It was the first time I had watched a movie that brought me to tears.  His book, which is based on his childhood of growing up a foster child after his father was murdered and his mother gave birth to him in prison, is very different from the motion picture. It was 14 years after watching this movie that I finally read the book. Antwone gave an account of his life through the case notes of the revolving social service workers or case managers that were assigned to him. It was when Antwone recovered his file as an adult where he was able to read what was written about him. His own narrative in the eyes of someone who was assigned to protect him.

Looking back, I grew up with my mother being in the social services field to help and repair families. Between watching this movie and watching my mother my entire life I decided to pick a career in the same filed. One of the most critical aspects of being a case worker is your progress or case notes. Document. Document. Document. If you don’t write about it in the case note, it basically never happened. These notes are critical in our field and the more I would write them the more I just wanted to just get them over. That was until I read Finding Fish. It struck me that what if a former client was to get a whole of his file and read what I had written. How would they see themselves through the narrative that I had written that was used reflect them? What if I had missed interpreted them? What if they were showing me all the signs of crying out for help, but I just wrote everything appeared fine. If you have never written or read a case note I want to provide you an example.

Case Manager arrived at the hospital after receiving a call that 2-year-old youth, who was struck by a car. CM arrived to see youth and his mother at the hospital, where youth appeared to be alert and had been checked out by doctors. Doctors state that youth sustained no serious injuries, and has experienced headaches and nose bleeds. Youth states that he is sleepy and is being told to not go to sleep until test are finished. CM asked mother what occurred and she states that youth was playing in the backyard when his ball rolled out into the street. Mother states that she turned her head for a moment and heard the brakes of the car and saw the youth laying on the floor. Mother states she picked up the child and began to run with the child to the nearest hospital which was a few blocks away. Mother states that the child never lost consciousness but appeared to be lethargic. Case Manager will generate a report with child services to gage the safety of the child.

At times these notes can be hard to write. You are walking into someone’s life at usually their darkest hour. To give you another example.

Case Manager went to the home to conduct a home visit to discuss the progress since the last visit. Home appeared to be crowded with family members when CM arrived, home has three bedrooms and has 5 adults and 6 children. All the children were dressed appropriately and appeared to be in good health. CM pulled Youth #1 aside to have a private conversation. Youth appeared nervous and seems to be adjusting well to his new surroundings. Youth is 5 years old states that he is sleeping in the bed with his siblings and cousins, 4 in total. Youth states he does not like his new school and would much rather stay home and help clean up around the house. Youth discussed missing his father since he is no longer in the home and wants to see him again. Visitation is currently on hold due to father not living in the state. Safety assessment for the children is currently placed at moderate.

It takes looking through the eyes of someone and putting yourself in their shoes to feel empathy. The ability to understand and share the feelings of others. Many times, I see that people who work in the field of social services and the education system are disconnected from this emotion. If we continue to look at these families and individuals as if they are different from us the disconnect grows. The two narratives I shared with you are of the same child. These stories written through the eyes of case manager are my stories. Do you look at them differently? Do you look at me differently? No these aren’t actually notes written about my life, but they could have been. While you listened be honest, who did you visualize? Is what you saw indicative of the man writing to you today? I hope this message serves its purpose. I hope this reaches you to see that the work we do is life changing. Not just for the clients we serve, but for the change in us, to see the possibility of potential in every human being, no matter their circumstance.