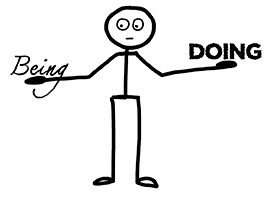 At a very young age we are asked a question that greatly impacts our lives, what do you want to be when you grow up? On the surface, this question seems simple and very innocent but has the power to alter who we WILL be. So often I was asked this question, and often the answer would change as I varied in age.  I want uhh as if I was ordering food at a drive-thru, each answer sounding more unsure than the last. Depending who asked me, I would often come up with an answer that satisfied them and not me. So why is it, that the question which has the most influential impact on our own lives, we rarely ever ask ourselves? Kids, you can be whatever you want to be, or can you?  I’m no dream killer, but I had a cousin who wanted to be a fire truck when he was a kid, sooner than later he was going to be very disappointed.

So, can you be anything that you want? What is it that shapes our wants? I often only wanted something after I had seen it or seen someone else with it. Are our desires truly ours? It’s safe to say that we love titles in our society. It is an easy way to be identified. Often, we work hard to forge our identities that they define us, or help others define us. How would someone introduce us in a room full of strangers? Is it exactly who we said we wanted to be?

If I asked, what would you do if failing was no option, how would you answer? If whatever goal you set your mind to would always work in your favor, what would you do? Do we learn more from failing or succeeding? If we learn from failing, why are we afraid to fail? Now failing and failure are words that I often used in the same context, but they are not the same. Do you realize that failure is your option? Failing means a weakness or shortcoming; a flaw. Failure is the lack of success, defeat, or nonfulfillment. If you fail, you have the ability to try again and improve, until you get it right. It is the moment you accept the results you didn’t desire, and when you stop trying, is when you are considered a failure.

Want and will, are also two words that are used in the same context, but are not the same.  Want is the desire to possess or do (something), or wish for. Will is expressing future tense; the inevitable. Once we have definitions we see that they are not the same, but we use them as so. I often hear people say, I want my own business. I say I will have my own business. Which statement sounds more powerful. A study shows that the average woman speaks about 20,000 words a day while men speak about 7,000 words. As accurate as this may sound, I’m not exactly sure what these stats prove. Regardless, it isn’t only the words that we speak when we are conscious that are powerful, but also when we are subconscious. We average about 70,000 to 50,000 thoughts a day. It is our thoughts that control our speech, our emotions, and our desires.

It may seem as if I am being critical with words, and just giving definitions, but it is with intent. Once we begin to speak and think with intention, we gain the ability to manifest or create. I find no power in asking myself or others what do you want to be, instead I rather ask what will you do. To BE means only to exist, that requires no effort. But to DO means to accomplish, to execute, to complete. When we just want to be something, we often aren’t satisfied until we have become just that.  When we can identify what we truly want to do, we will have satisfaction during the process, not only in the result. I leave you with this quote from the great tennis player Arthur Ashe, he states “Success is a journey, not a destination. The doing is often more important than the outcome.”